Really sorry to hear about the experience BOB81Z, it's disappointing that we've not been able to get this sorted for you. Have the team advised what options are available for you moving forward?

This was all after the issues I had connecting it in the first place which cost me 7 hrs over 4 days the week prior.  Then the next week, after approximately 6.5 hours over 3 days with numerous people they said that there is a congestion issue and they did not know when it would be rectified.  How hard could it be to  would release me from the contract and to go elsewhere, I could not actually believe it.  I then called and spoke to someone from retention team and hence do not have to pay until the issue is sorted which really doesn't help me as I do not have web access.  Also after 14 years I still believe in some loyalty even though it seems big companies do not believe the same as new people signing up get great benefits such as $240 credit but existing customers get nothing, but that is another story.

I spoke to multiple people and got tranferred multiple times and then had to tell each person my issues adding to it what was dicsussed or done before.  What is with having customer service systems that each department can not access and hence read what was enetered prior....seriously.  Anyway by the end I was told it was congestion "dah" and that they did not have any idea as to when it would be resolved and that the only solution would be to live with it or leave. Wow!

This morning I tried to do some work on my website (change prices add new products) and kept getting could not reach site no matter which site I tried, restarted moden etc and tried again and the speedtest showed practically zero. Guys I need help please and so do a multitude of others.

I was told Optus is aware of congestion at the node during peak times and was also told that equipment is being ordered to fix this, but there is no estimated time frame for the fix. Seriously? yet Optus is still signing up new users in my area and not telling any of them the issues they will come across.  If your truly worried about your customers you would have told us the issues before taking our money! or even better fixed the congestion issue, spend some of the money that has been taken and upgrade the bandwidth at the node.

Hey @BOB81Z - if the NODE/ CVC you're connected to has been flagged as experiencing some peak time congestion it does mean it's on our Networks teams radar however there is a lot of planning that goes into Network improvements across the country on fixed and mobile networks so it's not always something we can upgrade straight away when it becomes congested.

More than happy to have a look into the particular CVC you're connected to and see if we have any estimated time frames for updates yet. If you can PM me your full name, DOB and the Internet username for the service I'll see what info I can find.

I have had NBN for more than 18 months and my download speed is never over 15mbps. I called up a couple of weeks ago and was given a complimentary upgrade to the top speed of 100mbps. What a joke. It has made no difference whatsoever. http://beta.speedtest.net/result/5984339907

So do I change my provider or persevere?

Hi @mariemagd, that doesn't look right 😞 Can you please send me a PM with your full name, DOB and account number so that I can check that the speed pack has been applied properly?

So it looks like I`m not alone in the slow NBN stakes...Started well on the 25/5 Mbs package, was hitting over 20Mbs for a week or so then it started to fall off to the point where I was lucky to get 3 or 4Mbs. Rang tech support, tried the fixes, no real joy, maxed up to 8Mbs, they suggested upping the package 50/20.

Agreed to that and was expecting wonders.... great for the first few hours then dropped off again to less than 5Mbs, more phone calls and the upgrade cost was waivered.

Fed up of phone calls of me repeating myself to various people.... last test ran 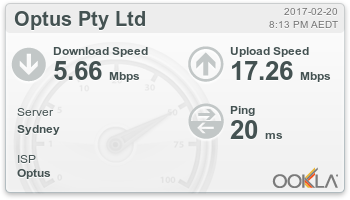 Oh no 😞 Really sorry to hear that this is ongoing @psy918 - I get that it's annoying to say the least.

What kinds of speeds are you getting during the day? Was this speed test completed over WiFi or Ethernet?

Did you have a fault ref # that we can chase up for you? Alternatively, please PM me with your username/account number if you're still having trouble.

I have the same problem. Started off fine for first week but ever since been slower than ADSL. Blamed excess household usage but switched everything off and still slower than ever. Run out of patience

What kind of speeds are you seeing on your end? Just to clarify, our Faults team advised the slow speed was occurring due to your own broadband usage?

Are you finding that the speeds are better during the day? Or is is running the same across the board?

Slower than ADSL and we don't have anything different running than before we switched to NBN. We can't even open video on Facebook it's that bad. NBN has taken us backwards. Paying and not receiving 😡