I was using TPG FTTB for 2 years but unfortunately I had to setup a solution that required a static IP address, something that TPG could not provide. As a result I switched to Optus - bad move!!! With TPG, I had a perfect running internet, the speed was 100Mbps/40Mbps every time I tested it. When I Switched to Optus, which was supposedly the same type of service apart from the $21 dollars extra per month I had to pay to be able to get the extra speed, I never managed to get it to match TPG's network and all I was getting was speeds of 50 Mbps, sometimes 60 Mbps. Something must have happened in the last couple of months and the speed dropped even further, I was only getting 20 Mbps/20 Mbps. I called to report these problems three times in total. First couple of times they just never called me back and hoped that if they ignored me for long enough I would just give up. I had this issue escalated and after a number of phone calls, I managed to speak to someone who apologised for the bad service, gave me a few options including to exit out of the plan. Unfortunately I have spent quite a bit of time setting up a solution that relies on the Static IP address and changing ISPs now is not as easy as it seems. I am currently stuck with Optus and feel frustrated. Since I signed up with them about 5 months ago, I have had 11 incidents in total, which I had to call support for, including one recently where a $20 discount was withdrawn from the type of plan I had selected. When I signed up, I was instructed by sales to add a mobile phone account to the bundle I was getting to qualify for a $20 discount. I said I did not need a mobile phone and I was told to simply destroy the SIM card when it arrived, so I would not use the phone and qualify for the discount. Just recently I received a letter from Optus to say that this discount was being withdrawn as I did not qualify for the plan I had and 4 days later I got an invoice with the new charges, which increased my monthly bill to $120. My experience with Optus so far has been the worst I have ever had with any service provider. I find it quite remarkable how a company like Optus can manage to get to the size they have with such low level of professionalism in every aspect. 😞
0 Kudos
Reply

been there done that,,,its like there robots same shite

Same story here ....mrs bitching she cant watch her cooking shows ....kids bitching cant play games and do facebok...Me bitching Im paying the full cost per month on a 100mps plan and getting 2.7mps on an ookla speedtest....Customer service must read from a script im sure as iv heard the same thing everytime with no real solution.........worst case is the obudsman saying we can resolve your contract as its like buying a farrari then going down to pick it up from the service department and find out you bought a diesel vw golf.......I want everyone who is experiancing this issue to reply to me a short yes...so i can forward it to obudsman ...sick of being ripped off ,,,,,sick of missinformation....pm me we can as customers make a difference ...optus if your reading this ...you know what will happen if customers are released from contracts....financially...so how about a SOLUTION...I am not the only one pissed off as I couldnt even get on to pay my bill for a service that is less than what iv paid for....CUSTOMERS UNITE

Hi @WagnerD, I'm sorry to hear about your experience with your NBN package so far. 😞 Can you please send me a PM with your full name, DOB and account number so I can check what's happening with the discount and your speeds?

DAZZA2  The Moderators can do nothing for you  and Optus doesn't  care ,   They are aware of the situation  in the months I have been complaining  they have done nothing  to fix the Problarm  but are doing plenty to make it worse they are advertising and signing up more people in your area.

If it was  a small family retailer doing the same type of thing the ACCC would have come down on them like a Ton of Bricks.

Optus are selling people 100Mbps internet contracts  when they know they can not provide that speed that is dishonesty.  If a Petrol station was telling people they have put a 100lts in your tank when in actual  fact  they  only  put in 40Ltrs  and charged you for the 100 and if it was Saturday  you went to the petrol station  they only put in 7 ltrs but charged you for 100Ltrs.

Have not heard back from ACCC or onbudsman .   What we are talking about is Fraud by  Foreign Company 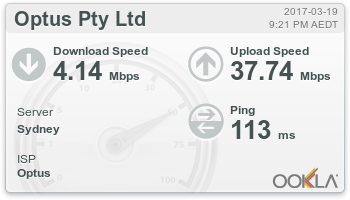 I can't handle this anymore.

My issues are currently being looked at - not sorted yet but there has been some activities towards fixing the overcharging part at least. As per the speed, I don't have any hopes it will ever be what it is supposed to be but also being looked at.

Optus get to the way they are by screwing their customers.    The customers that do know their rights are booted as quick as possible or put in a position they have no choice but leave.   The remaining customers are strung along and feed crap to keep them happy.

As for your static .. why dont you setup a dyn or noip dynamic dns and then point your DNS for your server/website(what ever it is you need a static for)  at that .. so that way its as good as static and your not locked with these fools?

The speed issue that consumers are facing with Optus simply comes down to honesty. Optus knows 100% what the capacity of the service they are selling is but chooses not to tell consumers before they sign up.

Optus has just gone through a massive exercise of rebranding and spent a substantial amount of money in it in an attempt to gain a bigger market share and take on big players like Telstra. In my opinion, the first thing they should do is to be honest and up front with any potential customers, applying morals to business practices does not require substantial amounts of time, effort and money and I am sure it will help your business grow over time. Why can’t they produce speed reports that gives people an idea of what speeds to expect in their area before they sign up – something that could be easily done. Now, if Optus thinks they’d be losing business by doing it, what they should do is buy more bandwidth from the NBN and provide an internet service that is compatible to what their customers are paying for. 😞

Optus are selling people 100Mbps internet contracts  when they know they can not provide that speed that is dishonesty.  If a Petrol station was telling people they have put a 100lts in your tank when in actual  fact  they  only  put in 40Ltrs  and charged you for the 100 and if it was Saturday  you went to the petrol station  they only put in 7 ltrs but charged you for 100Ltrs.

what you have written above is perfect and thats the type of things people need to put into complaints to ACCC.    If people complain to the ACCC and just put im being screwed by optus they will tell you to complain to TIO  .. but if you can build a case to say hey these guys are not doing the right thing and make a direct resembalance to something like above ..  it is much better