For months now since we've switched to NBN from Cable, our internet drops out frequently throughout the day. We've had many Optus and NBN technicians come to try and fix the issue but it still persists. We've done everything we could possibly do on our end to fix this but we still haven't found a solution.

We have tried 3 different routers but they all experience the same issue.

The last NBN technician relocated the NBN wall plate so it was right next to the router, this worked for 4 days and then the issue returned again. We've swapped out all the cables for new ones, still same problem.

Thankfully our previous Optus cable connection is still active and we can switch over to that if we need to use the internet as it works perfectly fine albeit the speed is a bit slower (mainly upload speed).

I have also noticed that there has been a significant drop in our NBN connections upload speed. We used to get 100/40 and while I have no problem with our download speed as it is usually over 100mbps, the upload speed has dropped between 1-13mbps and I suspect we have been shifted to 100/20 speed.

We have an ongoing case with the TIO and Optus which is being monitored by a case manager who is currently logging how many times a day our NBN connection drops out before they can do anything else. Of course it's frustrating for our family to constantly get disconnected from NBN and we often need to switch back to cable as we really need to use the internet. Surprisingly, Optus has also stated that 1 to 3 dropouts a day is normal 😮

In any case, today alone I recorded the internet dropping out 5 times while I was monitoring it at these times:

I have recorded a video of the modem and the router when the internet drops out here:

As far as I can tell the only possible culprits that remain is the NBN ARRIS Modem is faulty although one NBN technician ran a quick test on it and said it was fine but I'm not sure I can believe him. The only other issue is that it is the line coming from the street to our house or something like that which we have no control over.

Would switching ISPs to say Aussie Broadband or Telstra help us fix this issue?

This NBN has been a nightmare for us, to my understanding, HFC NBN and Cable Broadband were basically the same thing so I'm not sure why we had to switch. It's not like they gave us Fibre to the Premise which would of been great.

Also now NBN and Optus can blame each other for problems and no one has to take responsibility and we can't talk to NBN directly.

Our family is so frustrated, we just want a stable reliable internet connection. Our internet used to work in the past, why can't it work now 😞

I will be reporting this all to our case manager, I just wanted to post here in case anyone else had experience with this issue and could provide some more insight and possible solutions. 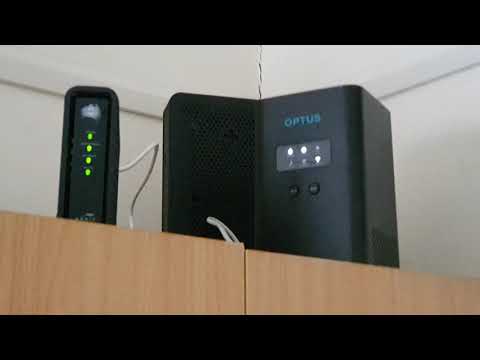 Hey @hms2 - Thank you for sharing this with us here.

Generally the NBN is similar with most networks, it's the support side that does the checks and investigating, along with the pricing that's what different.

It sounds like quite an ordeal though and it's not good that this has dragged on for so many months. I believe you'll be in good hands with the Case Manager however, if you need a hand, please send a private message to the official Optus Facebook page or Twitter page and we can check specific things that you may be after - Steven

Did we answer your question? Please mark it as a Accepted Solution and if you see something that was helpful to you or the rest of the community, giving a Kudos is only a click away.

You may not have control over that but NBN does.

As the problem is intermittent the NBN tech should have replaced the Arris modem. A quick test on it could not possibly prove that its not the modem.

Are you actually paying for a 100/40 (speed pack 4) or 100/20 (speed pack 3+)? There was a short transitional period of time of a few months where pack 3+ customers were getting free pack 4 speeds.  If you are on pack 4, your should be entitled for a credit if you are only receiving 3+ speeds.

Thanks for your reply, The NBN tech did bring a replacement Modem with him but for what ever reason decided not to replace our modem after performing his 20 second test and saying everything was okay!

I have been testing our upload speeds and we are able to get over 20mbps depending on the time of day, so at least I know that is still working thankfully. We've been on Speed pack 4 for as long as I can remember.
0 Kudos
Reply
Top Contributors
View All