@Mr_PT Really sorry to hear that you've had ongoing issues with your speed 😞 It's never the way we'd want to leave you feeling.

Just to clarify, those speed tests were through WiFi - are you noticing much difference over Ethernet?

Happy to run a few tests on it from here if you can please PM me.

If the Sagc@ap router had decent wi-fi then that wouldn't even be a question.

When I run Ookla speedtests connected by a Cat 6 cable to my D-Link 2890 compared to doing the same speedtest on my Samsung Galaxy 6, there is LESS THAN a 5% difference in the results. A good wifi connection can in practice be almost as fast as a wited router connection, because the weak link jn the comms chain is not the network connection, but the bus speed of the computer (or end point) used.

@AlexRH why not just PM @Mr_PT with a formal Complaint # and assign a Case Manager to geniinely investigate and then respond to @Mr_PT rather than blame shifting to Optus own supplied Sagec@ap wifi router.

When does spin stop @AlexRH and real resolutions start?

@GKarklins funny enough, I have 3 optus crap routers at home, and yes I know how to unlock the advanced mode of the router and login with a real admin user, so funny to see every single user at Optis is logged in using john_citizen account.

@AlexRH as you may see, unless someone from the management team wants to do something about this, there is nothing you can do about.

How about giving me a complaint number and assign a case manager?

Just want to say when I first got the NBN connected I had nothing but issues.
1. Took a week and a half to get my NBN modem activated.
2. Had 2 weeks of what people mention here, getting 5% of the 100/40mbps speed pack I was paying for.
3. Various back and forth complaining to both the NBN and Optus Twitter's.
Then out of the blue, my NBN service magically became the service I was paying for. 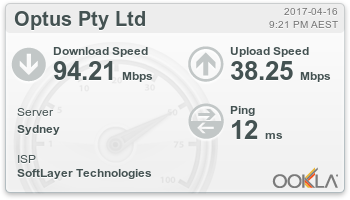 So, it's basically up to you all what you want to do, maybe im just a lucky one, but the complaining really payed off and that is my 'All the time speed' as I find it doesnt matter if its peak or off peak, that is what I get.

This is my latest post from the question I raised in ask the crowd under the heading "WiFi Issues sagemcom F@ST 3864".

A couple of things have happenned with this issue in the past week.  The first was that someone from the Fixed Resolution Team contacted me about the problem and stated that he would wanted to hear what was about the cabling.  I stated that it was never about the cabling as the Optus Sales area neglected to book the Technician to do the cabling originally so that was postponed from the 15th of march until the 3rd of April, the next available appointment for an Optus field tech.  I stated that my issue has always been poor WiFi signal in the house since the new WiFi router started being used.  He stated that he would pass my issue to the Tech Support area to help me troubleshoot the WiFi problems.  I stated that I am not convinced that they will be able to help as I need access to the log data of the WiFi Router to see what errors are being encountered with the WiFi signal.  He stated that the Tech is not one of those on the phone support so should be able to help.  I also flagged my frustration trying to get through to phone tech support sometimes needing to call 3 or 4 times as I get sent of to prearranged solutions and then cut off with the calls sometimes taking 90 minutes or so.  I told him that I would replace the WiFi Router in a second ..... but as Optus would not give me the SIP information the NBN connection would work but no home phone .......

Long story short the Optus Tech rang and said he could not help, apart from general trouble shooting like change channel or reset the WiFi Router etc, with the modem and referred me to Sagemcom Tech Support so I can arrange a time to talk to one of their Techs.  Not sure how this is going to help.  But will ring on Tuesday and will see what happens form there.  This is so *&*(^&^* frustrating.

So it appears no one in Optus is able, is that willing, to help and I am being palmed off to the manufacturer to seek their advice.

So what questions should I ask them to try and resolve this issue about the sagemcom F@ST 3864AC?

1)  Can you provide the specs of the modem, including signal strengths, and latest firmware number for the

2)  What is the manufacturers estimate of the maximum range of the WiFi signal (2.4 and 5 g channels)

3)  Is there a log file, either visible or not visible to the end user, giving detailed performance statistics, WiFi and Cat 6, for the device

5)  Why is there no user manual for the device.  There is nothing to even explain why there is a second phone line jack on the back and why can't Optus Phone Support tell me what it is for and why did they refer me to Sales about this

That is all I have at present and look forward to suggestions from the Crowd.

@Albus Give up mate.

Optus has been taken to court under a Freedom of Information request for configuration information for their custom configured Sagec@ap router. Optus won the case on the basis that it's proprietary intellectual property they have developed in conjunction with Sagec@ap.

So mate, bigger boys than you and I have tried to break the Optus/SageChina marriage, and they didn't get anywhere.

Just give up and buy a 3rd party SIP enabled router. Or move to another RSP that offers a far better router with decent wifi and phone coonectivity.

@GKarklinsThanks for the update as I was not aware of the FOI request.  I will have a look at the SIP enabled router BUT if Optus won't provide the SIP info I am still in the same sh^t position I have been in since this was installed.  Looks like I will be off to the ACCC, based on the info provided by sales that the WiFi Router was better thatn what I had previously.

Hi  @Albus not sure if this will work for you, but what others have done when their Sagecr@p Optus router provides lousy wifi, and they want to retain their phone line:

- retain the Sagecr@p as the primay NBN router

- keep your phone connected to the Sagecr@p

- buy and install another router (D-Link, Netgear, Asus etc) and plug it into one of the network ports on the Sacecr@p

- if wifi signals comtinue to be weak after that, buy and install a wifi extender and setup the SSID and password to the same as your existing network. Place the wifi extender around half way in distance between your Sagecr@p/new router and the furthermost point where your wifi speeds are slow. MSY sell a D-Link wireless extender with 4 port switch for around $50

PM me if you need any help in setting things up. My response times may be slow, but I talk English and not through a voice-simulated American accent following scripted non-sensical answers that answer nothing, but so commonly used by outsourced Call Centres.

But as an alternative @Albus what I and others have done is:

- ditch your "landline" phone, just unplug it, to avoid the ever-increasing random unwanted Call Centres calling to sell you something; or Charities that can avoid the " Do Not Call" register.

- get a decent, low cost Mobile plan for all phone calls (you may already have one)

Personally, I keep my landline unplugged to avoid the voluminous Call Centre sales calls that I receive despite being on the "Do Not Call" register,  which Charities are exempt from, and having a Silent landline number.

No idea where those random Call  Centres are getting my Silent landline number from, but someone is  "selling" my Silent number to them. Hope it's not Optus.

My take on this ... unplug your landline.... just use your Mobile. It's cheapet and more secure. And you'll have no need to stress over configuring your SIP issues 😊

Hey Guys - more than happy to see what information I can find in regards to the specs of the modem.

@Mr-PT - the john_citizen is the default username for the PPP authentication of the modem and directs customers to servicenet until they log in using their Optus supplied username and password for ADSL.

I'll come back to you all in the next few days once i have some more info around the router.