Turn on suggestions
Auto-suggest helps you quickly narrow down your search results by suggesting possible matches as you type.
Showing results for
Search instead for
Did you mean:
Ask a Question
Topic options
COVID-19 impact to Yes Crowd & Contact Centres info here
Highlighted

I am based in WA and have been having issues with my internet across multiple games, the servers tend to be hosted over in sydney.

I use the NBN optus provided modem (white) with a ethernet conection, my internet is FTTN

I spoke to Activision Blizzard tech support and got this comment

"When your connection reaches one of your ISP hops, the latency (ping response time) is increasing by quite a bit (over 100ms). Then, as it continues to try to reach Blizzard, it looks like there is 1-8% packet loss on several of the hops. This is not something you’d be able to fix on your own, but rather something the ISP would need to perform maintenance to correct."

here are the win mtr results 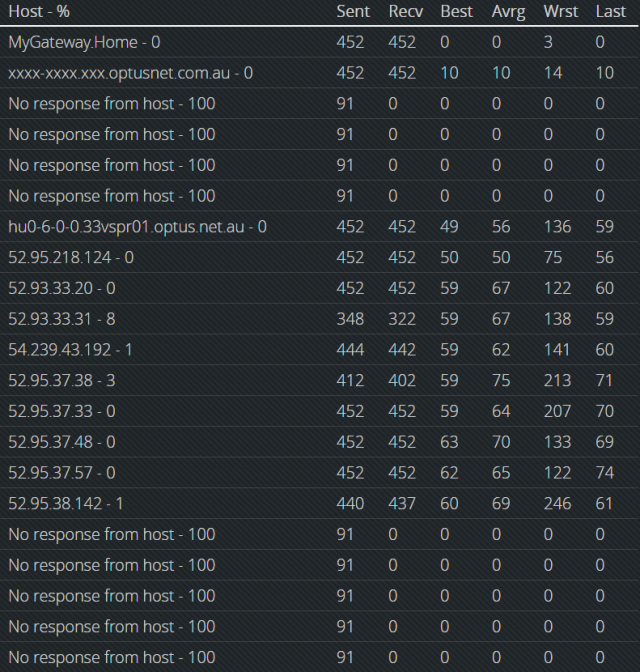 Per your WP thread...

The MTR you ran, shows when it exits the Optus network that it enters amazon where it seems to loop. I don’t quite get why activision told you to complain to Optus about a network that isn’t belonging to them.

plus, the hops over 100ms whilst higher aren’t out of the ordinary for Perth to Melbourne, plus the hops not responding are simply routers/switches within the MPLS network.

I'm a Yes-Crowd Contributor, not an Optus Employee, and I contribute on a voluntary basis. Did someone on Yes Crowd answer your question? Did they share a great tip Please remember to acknowledge their awesomeness by throwing a Kudo and or Accepted Solution their way.
1 Kudo
Reply
Highlighted

Thanks for your response

is this something i would need to concat aws about or since they arent an isp i need to contact optus to ask aws to look into it? how does this work.

does optus need to route to the overwatch servers using amazon network?

should i just move off optus to another isp and see if they route differently?

Just a second thought, are the blizzard overwatch servers hosted by aws? would it be better for me to go through blizzard tech support to talk to aws

so old modem and new modem have the exact same issue

looking more and more likely optus or aws issue, although blizzard did some tests and said the following:

"It looks like there is some packet loss noted in the winMTR test. I double checked this with some internal tools and do see a spike in both packet loss and general latency. From there I did a comparison between your connection and the ISP connection, but it does not appear to be trending in the same direction so I’m thinking this may be a single user issue."

i suppose the next step would be to rule out the computer itself..but that wouldnt explain why my telstra hostpot was fine

So i have an update to this..seems like we have found the problem guess its time to contact optus directly

That new test you sent is clear of the original issue I was concerned about, so we’re actually in better shape than we were previously, even if it hasn’t completely fixed your problem. Now we have evidence that it’s not your router and we can leverage that information to help you work with your ISP on this. Sorry it wasn’t your silver bullet fix, but if you don’t like the new router you should be fine to return it, depending on the return policy of wherever you got it.

However, at this part highlighted above, we have a peering issue. As your ISP hands off from the Optus nodes to the backbone here, it starts dropping a ton of packets. To see this, check that second column immediately to the right of the IP addresses (labeled %). You see you start dumping 3% of packets here. That handoff is the problem.

We don’t have any open issues which explain this, especially ones that have been going on for as long as you’ve been having problems. Here’s what you’ll need to do.

Reach out to your ISP with your WinMTR tests handy.
Try to tell them that you need to speak to a tier 2 or 3 technician to report a peering issue with their network backbone. You should hear their eyes glaze over. They may insist you do some tier 1 troubleshooting. If so, do it, but when it fails request escalation again.
Discuss the symptoms with the higher tier technician and see if you can forward the tests you have. You’ll need to let them know that the problem doesn’t begin within their direct network, but with one of the peers they are using. Here is what you need to focus on:
As your connection transfers from the optus network into the AWS backbone, you’re dropping data packets. It persists through the whole test, so we know it’s real packet loss.
This occurs for all games on AWS
A mobile tether works around it, so we know it’s not and AWS server level issue.
You need them to reach out to whoever owns that part of the internet, or re route you around that part of the internet so that you no longer have the problem.
Beyond that we can’t really help you with interaction with your ISP, but the onus for fixing this one’s going to be on them. Alternately, you can download a VPN of your own which’ll work around it. Hopefully with this information in hand you can get it resolved.

Best of luck at any rate. If you get reports back from the ISP that it’s fixed, feel free to hit us with another winMTR if it’s still happening after, but once they fix the handoff issue you should be fine.

Hey mate, did you get this resolved? I have a similar issue currently.