Hi... I am a new customer to Optus, we received our white Sagemcom modem 3 weeks ago, and a Black HYBROAD Optus Fetch TV box.    Everything is wired.  No wireless is used at all.

I don't watch much TV, sport is about all.  Specifically the Champions League, EPL.  SO far TV has been unusable, my children like to play online games.  They got banned from playing by the moderators as they start a game involving others and then internet drops out ruining the game.  No-one is happy!

So far I've recorded 7 football games.  Not a single one finished recording.  Last Tuesday Night I recorded 3 games in a row on BEIn1.

To my understanding if Internet Drops out the Fetch Box will stop recording - abruptly - so that explains the TV issue (I think), so I go with the assumptions there is one problem only - the broadband.

Enough Complaining, but I wanted to highlight the severity of the problem. - Here is what has happened

I spoke with Optus 2 weeks ago.  They asked me to reset the modem, it fixed it (for some minutes).  Since then we reboot the modem several times a day.

Some days later I spoke with Optus again.  Speed dropped to 0.26 MB/s last week whilst talking to him.  He said he changed something at the exchange side.  I gave him permission to remote support my PC and he also changed the Wireless Channel to 11.

This week was just horrible.  Thankfull we have Free to Air tv...  I rang Optus on Thursday, and he asked me to reboot, and then after a speedtest he proceeded to tell me the speed was of 6MB was just fine, and he couldn't do anymore.  Whilst venting my frustrations to him the speed dropped to 0.12MB/s and a latency of 3 seconds.  He then investigated further and after a lengthy call of approx 90 Minutes, he decided to get a 2nd level technician to ring me.

Well done.  30 minutes later I received a call.  Had to go through everthing again.... Unplug everything, reset modem, do an exchange test.  He was happy, I wasn't and whilst talking to him the speed dropped down below 0.2 MB/s download again.

The decision was made for a next level?? support person to call me and I made an appointment for 12 -> 4 Friday.  The guy (no need for names) said he would ring back after 4PM to see how it went.  Neither rang.  😞

Throughout the entire day my internet drops for minutes at a time, to speeds where I can't even load the YesCrowd forum.

We are on an unlimited ADSL2+ broadband plan.  Simple Configuration - wired.

Our speed fluctuates to levels that are usable (10 MB.s) but usually hovers around the 6 MB/s.   However, all day long at random intervals it drops out to speeds where everything fails.

I will be ringing Optus again on Monday.  We are 3 weeks in, almost given up.  Right now the TV is on in the background.  It plays 10 seconds.  Pauses 5.

There is a problem somewhere, and any words of wisdom would be really apreciated..... Thanks in Advance 🙂

If anyone wants to watch todays champions league games they are welcome to come to my place.

Fist recording (Man City bs Barcelons) at 6AM one skips every 10 seconds, with Channel Currently Unavailable, and is pixelated beyond belief.  And the recording now just aborted recording with an error. -> Not fit for purpose!

My download speed is 1.64 MB/s.  This after week 5 with Optus.   Today I shall contact them again for the 5th time.

Anyone is welcome to visit to see the quality we are getting!!!  😞

Can someone advise how to cancel with 0 cancellation costs.   I can't keep on paying for this level of service.

Really sorry to hear this NewCustM 😞 We can can definitely take a look and see what's going on. Can you please drop me your fault ref number or account number via PM? Please also include your address and DOB for privacy reasons.  Thanks

This is getting a tad ridiculous,  I've had some care from Marcel (Moderator),  I was promised follow up calls - never received them.

Optus sent me a new modem, black instead of white.  THIS fixed the Wireless provlem, but still speeds average.

I still have drop out although they seem not as bad.  TV is still extremely poor.  Catchup is Youtube quality (380p) magnified on my 4K TV.  Many Streamed TV programs abort abruptly during recording.

As of Thursday, the problem became worse again.  I have had to resort to plugging in a WIFI adapter so I can hotspot my data on my phone so I can type this.

Even speedtest will not load.   I am an IT professional, and have worked in Networking for over 10 years, and still develop software.  IT is not the computer.  Resetting the modem is not the answer.

So now I am running on my phone.  I had to do this, because I was unable to reach the support page in order to type this message,

As soon as I switched to my phone, I got 4MB up and 4MB down, and a Ping Speed better then then what I get on my ADSL at the best of times.

So what do I do know?  This is costing me money, and so mch time.

Here;s the speed without my phone hooked up 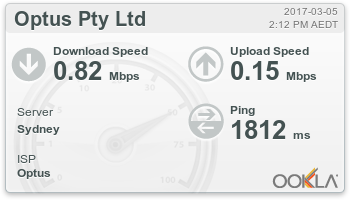 Thank you for your PM.  Calling Tech Support has not helped the previous 4 or 5 times.   But I will ring them again. (I have spent about 8 hours talking to these guys allready).

I can understand the frustration with this @NewCustM and I am sorry about the troubles you've had resolving the issue. You may prefer to speak to our dedicated Yes TV by Fetch tech team on 1800 230 158 as they specialise in any issues with Optus Sport or the Premier League via the Fetch STB.

Two weeks later I feel I should give an update.

I am currently typing this on using HotSpotting from my phone paying excess data usage charges.  I used all my phone data (16G) over the last few weeks as the speeds from optus ARE SO SLOW, and I keep on having to switch to using my phone.

@Optus:  This is NOW affecting my work, general things that need doing.  and other things.  I am NOW paying extra charges needing to HotSpot my unlimited ADSL connection.

I pay my bill each month (frankly it should NOT be billable).  Please deliver the paid for service.

@NewCustM I'm sorry you're still having trouble. We're not able to do any more for the issue than Tech Support can unfortunately. Last time you called them was a technician arranged at all?